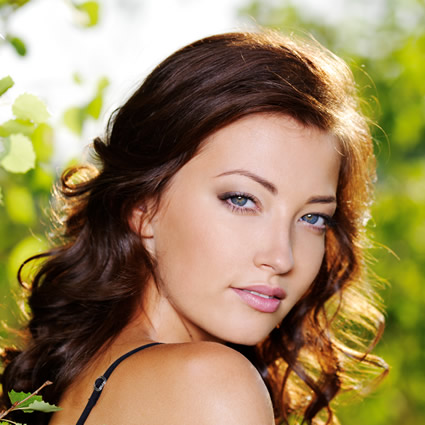 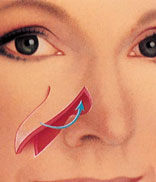 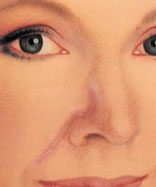 The incision lines of the flap are hidden within the natural creases of the nose and face.

A word about reconstruction.
The different techniques used in treating skin cancers can be life saving, but they may leave a patient with less than pleasing cosmetic or functional results. Depending on the location and severity of the cancer, the consequences may range from a small but unsightly scar to permanent changes in facial structures such as your nose, ear, or lip.

In such cases, no matter who performs the initial treatment, the plastic surgeon can be an important part of the treatment team. Reconstructive techniques- ranging from a simple scar revision to a complex transfer of tissue flaps from elsewhere on the body-can often repair damaged tissue, rebuild body parts, and restore most patients to acceptable appearance and function.

Recognizing Skin Cancer
Basal and squamous cell carcinomas can vary widely in appearance. The cancer may begin as small, white or pink nodule or bumps; it can be smooth and shiny, waxy, or pitted on the surface. Or it might appear as a red spot that’s rough, dry, or scaly…a firm, red lump that may form a crust…a crusted group of nodules…a sore that bleeds or doesn’t heal after two to four weeks…or a white patch that looks like scar tissue.